Pat lived for a year on this sub-tropical paradise during the 1960s. Among the most remote of inhabited islands, Norfolk is located 1,600 km south of Fiji, 1,000 km north of New Zealand and 900 km east of Australia. Just 35-square kilometres in extent, Norfolk is a mere speck in the ocean.

ANTARCTICA, our tome, took us to Norfolk Isand and Pat’s bottle house, all the way from our home in Canada. The first connection was through our friend Des Lugg who for decades was head of Australia’s Antarctic medical program. A few years ago when Des and family were visiting with us, we relayed the story of the beer bottle house, which when shared with all its wonderful detail is an hour long in the telling. When we met Des through The Explorers Club, he was working for NASA in Washington, his business card reading Medicine of Extreme Environments. No doubt the conditions of outer space, Mars, and Antarctica qualify as extreme! Norfolk Island being a protectorate of Australia and Des having been responsible for appointing physicians to the island hospital, he was able to connect us overnight, via the internet, to the current homeowners of the beer bottle house – Heather and Bob Tofts. Heather is the daughter of the man who hired Pat to build the bungalow over four decades ago when Pat was a strapping 21-year-old. For the next two years we had an email relationship with the Tofts, never imagining that we would have the opportunity to visit. Through serendipity the opportunity came in October 2007, thanks to the World’s Presidents Organization which engaged us to present our ANTARCTICA lecture at a forum held on that remote island. Life is so wonderfully strange. 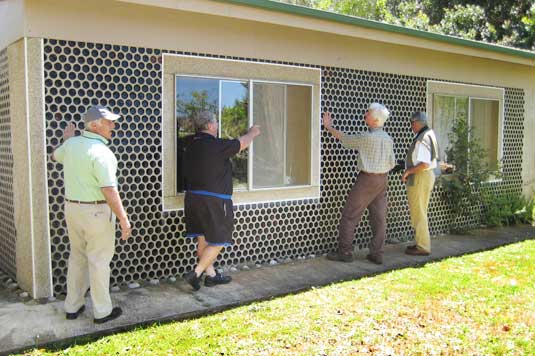 The home is solid — as you’d expect from Pat — and surprisingly it really looks rather contemporary. Hard to believe the building is over 40 years old! It certainly has aged gracefully. The home is dated only by the impression in the ends of the bottles that give the year that the each bottle was moulded: 1943 through 1966. 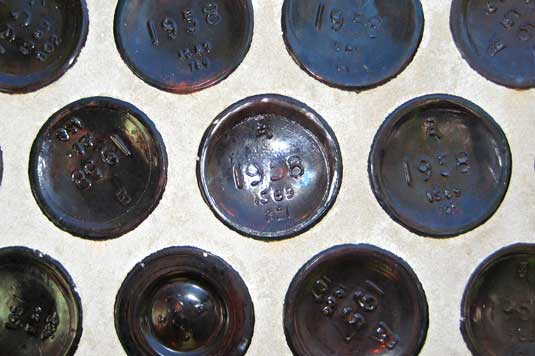 Pat estimated that he used over 40,000 beer bottles to construct the house. No, he certainly did not drink all that beer himself! What a great use of empty bottles! Even the interior walls are made from beer bottles and would you believe the bathtub and floors as well! Bob and Heather Tofts are proud owners. Here they are with Pat in their kitchen, pleased to hear the details of the building of their home, a story which had been lost. 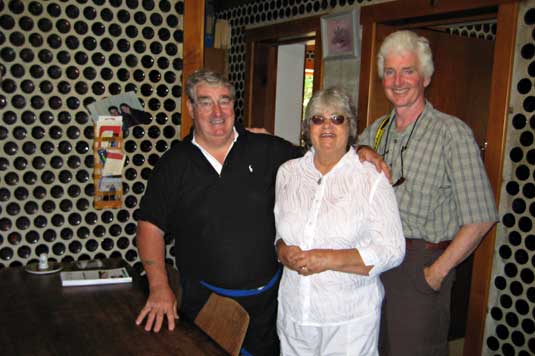 Bob Hemus, Heather’s father, had hired Pat to build the house, a task which took ten months. The bottles are Australian one-quart beer bottles the contents of which were consumed by patrons of the island’s two pubs. The pubs were established with the arrival of airman during WW2. Hence the bottles date from 1943. Bob was a contortionist who performed at these pubs. Delivery of manufactured items to the island being very expensive, Bob had the brilliant idea to recycle the empty beer bottles as potential building materials. The practice had been to dump them into the ocean at the tip. In 1966 when Pat toured the Hemus property, there were pyramids of beer bottles everywhere grown over by jungle. Pat took photo below after hacking the jungle away from one of these pyramids of bottles.

Bob showed Pat what he had in mind, together they laid out the foundation and then the first course of bottles. The bottles are placed neck to neck with the butt ends held in place by the wooden forms. Once the first course was set perfectly level with a slurry of cement atop the footing, all subsequent rows followed easily, rather like building a lego set. 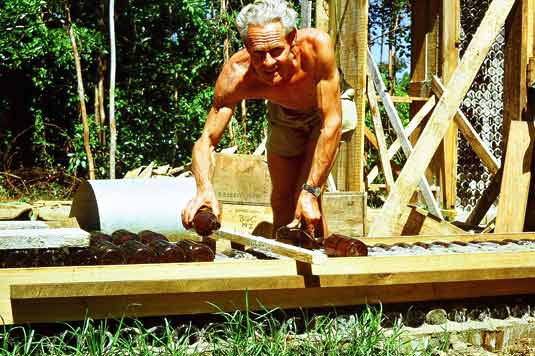 You’ll recognized Pat, then 21 years old, with a shock of dark hair. Pat was left to build the house on his own, Bob Hemus being unusually industrious, working by day at his large, market garden and, come evening, entertaining at the two pubs. Bob could see that Pat, a young Canadian, was a hard worker. Not only did Pat build the house, he also mixed all the cement by hand, there being no electricity on the property. 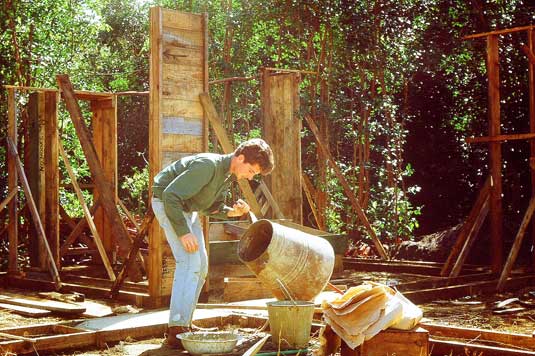 Pat worked steadily and the house rose from the jungle near the town of Burnt Pine, the only town on Norfolk. 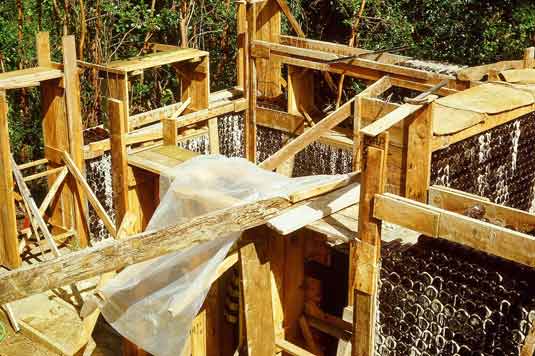 Pat photographed all the stages of the construction of the house, often from the vantage of a crude tower he fashioned. You must appreciate that the photo below is a “self-timer. Pat set one camera on a tripod, tripped the shutter, and scrambled up the ladder, shinnied the plank to pose for this photo, all the while holding his second camera. Pretty agile fellow! 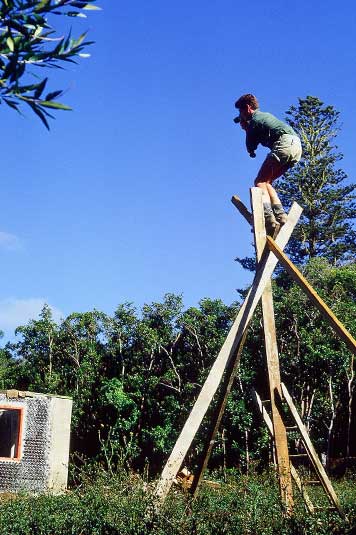 Pat departed Norfolk in late 1966 having brought the bottle house to the weather-proof stage with a flat roof installed. The finishing was done by Bob and others later on. 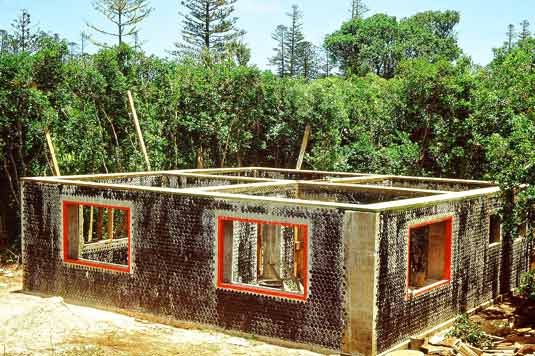 He sailed away from the island setting out on a multi-year voyage throughout the South Pacific aboard a trimaran he and two New Zealanders had built. In the 1960s you could not develop film on many of the islands and Pat had to await Hawaii before he could get prints made and mail a set to Bob Hemus. But Pat never heard again from Bob; not then, nor when back in Canada where Pat sent photos yet again. Interestingly a couple of those prints, with Pat in them, have survived time, mould and mildew and were in Heather and Bob Toft’s family album. We learned that Bob Hemus had developed early alzheimers, likely just after Pat departed Norfolk. Heather having lived mostly in New Zealand at the time the house was built, knew little about the Canadian who did the labour for her dad. Thus this wonderful story came to full circle for both families, the Keoughs and the Tofts, forty years later. 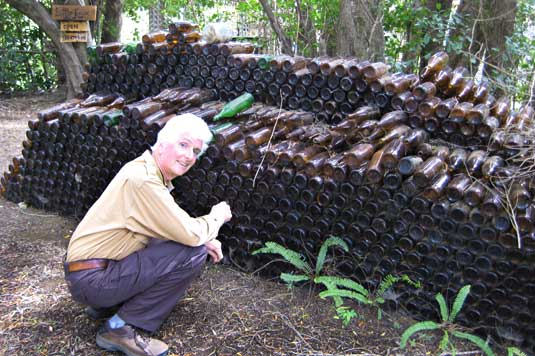 And forty years later, when Pat and Rosemarie visited with the Tofts at their beer-bottle home, we were surprised to see that there are still quite a few bottles left over!